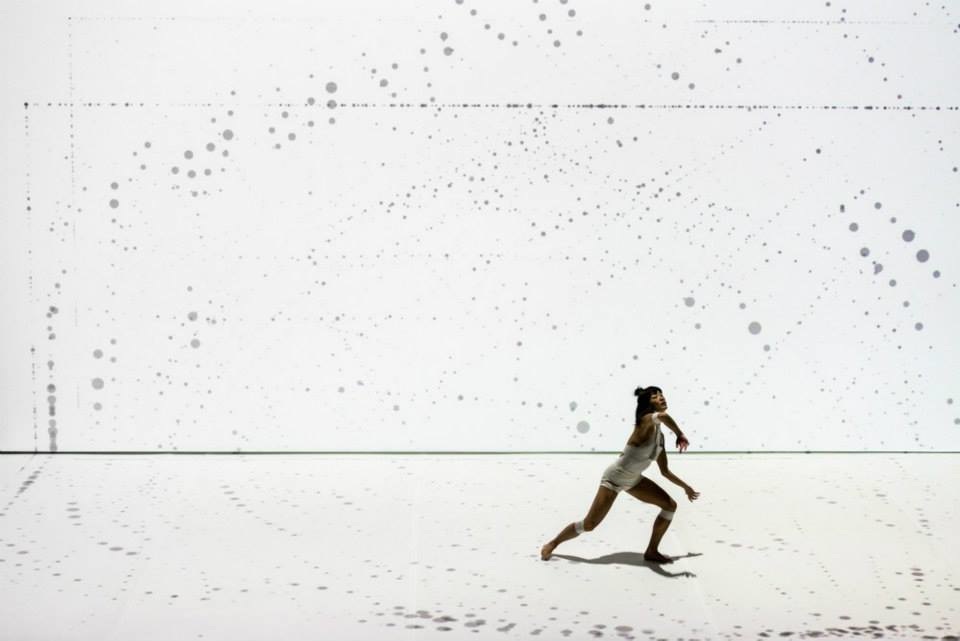 Interactive spectacle THÆTA is based on symbiosis of contemporary dance with technology. The concept is steeped with the subconscious realms and dealing with the ego – the dark and light shadow aspects of self but also on the edge of the conscious, waking self: visions on the edge of sleep, wispy light shadows, multi-dimensional geometric objects, sudden sound as if from the halls of a mind in a dream state. This liminal zone is a state referred to as Hypnogogia. THÆTA embodies this borderland state.

Artists merge interactively body dynamics, auditory sensations and visuals. A specifically designed prototype of wearable electronic devices whose main module is based on Arduino Fio, and an x-bee module for wireless communication is used. Sound is composed of abstract atmospheres and drones which at a certain point morph into rhythmic patterns and lead the piece to its most intense conclusion. The sound synthesis process is connected to the sensors’ signals and the overall quantity of movement is mapped to the occurrence of sound, which shapes refinements with movement data’s details. The sonification of images and movements aims to hypnotize the audience with various tricks, from noise cacophonies to otoacustic emissions. Artists merge all these elements into one constellation in live performance.
THÆTA is the third performance of StratoFyzika’s Shadows Trilogy.

Berlin based interdisciplinary art group creating movement-based interactive audiovisual performances, founded in 2012 as the meeting point of three personalities, three cultural backgrounds and three fields – sound, animated images and dance. Aikia (Alessandra Leone) from Italy, Lenka Kocisova (Akkamiau) from Czech Republic and Heather Nicole (Hen Lovely Bird) from USA. Each of the three artists represents one “stratum” (Strato) of our complex perception: audio, visual and movement layers. They use the laws of physics (Fyzika) as a metaphorical way of explaining material states from the realms of imagination, emotions and spirit. A multi-layered process that echoes the cognitive processes of the mind and the way stories are collected through life as a tool of learning and orientation.
The group often invites other artists to collaboration to enhance the projects technologically.